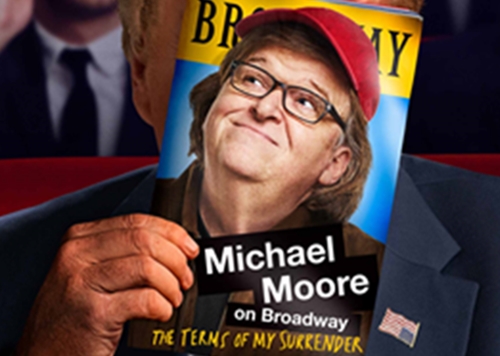 These are just a few of the less-than endearing terms used by critics to describe Michael Moore and his Broadway debut, "The Terms of My Surrender."

The Academy Award-winning documentary filmmaker and Flint-area native opened his one-man show at the Belasco Theatre two weeks ago. It runs through Oct. 22. It features Moore alone on stage for the better part of two hours in a blend of several formats; at times rally, lecture, game show and stand up routine.

He comments on current events and President Donald Trump, tells stories from his past and converses with guests. The show is scripted, but also changes depending on recent politics and who drops by on a given night. Its self-determined central question is: "Can a Broadway show take down the sitting president?"

The show is also full of wacky ploys. Moore keeps a box seat reserved every performance with an open invitation for the president and his entourage to attend. (He has a better chance of bumping into Trump  at the KFC on Broadway, or the one on 7th Avenue, which is much closer to Trump Tower). One night he transported the entire audience on a pair of tour buses to the front of Trump Tower for an impromptu rally.

So far, according to Playbill, the show has done moderately well, grossing almost $1.5 million in 12 performances as of Aug. 20. It fills 90 percent of seats on average.

In a way, that makes sense. Moore is an incredibly attractive figure to criticize: His documentary success has made him an international celebrity, his political leanings (aggressively progressive) and the show's subject matter couldn't be more oversaturated, and his brash personality makes him an easy figure to dislike. It doesn’t hurt that he’s making his Broadway debut in a world renowned for being selective and elite. 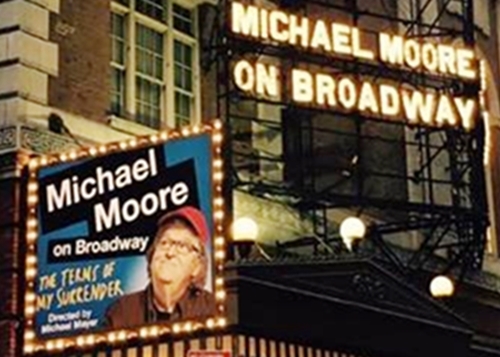 "As the show wore on, clocking in at nearly two and a half intermission-less hours, it was easy to see why people love Moore, and love to hate him," writes The New Yorker’s Michael Schulman in his review. "Moore's gleeful grenade-throwing rubbed people the wrong way, and plenty of his ideological allies have yet to warm back up to him."

Almost every review of Moore’s show hit the same points. Some don’t hold back one bit. “Less a jaunty excursion than an unvarnished ego trip, ­the show is a slog through cringe-inducing skits and only occasionally engaging anecdotes about Moore’s stumble into the life of a political gadfly,” writes Peter Marks in The Washington Post.

Though marketing materials for "The Terms of My Surrender" encourage Trump supporters to attend, and explain how Moore wants to bridge the gap and create a dialogue, inside the theater, it doesn’t feel that way.

"Despite Moore's protests that the show isn’t a 'political rally,' what else are you supposed to call a room full of people chanting and cheering every time a majority opinion is reaffirmed, and hissing and cursing whenever the Enemy is mentioned?” asks Sara Holdren in Vulture.

In a similar vein, The Guardian's Jake Nevins asks, “The show might be addressing the very people—thespians and Manhattanites—who already see the president as Moore does: dangerously incompetent, exceptionally narcissistic and pathologically untruthful. If Moore hopes to convert the unconverted, is a Broadway stage really the best place to do it?”

It’s not that Moore isn't a fantastic activist and filmmaker, writes Jesse Green in The New York Times, it's just that he's not made for the stage. “Mr. Moore, awkward and often tongue-tied, is not a natural stage creature," he writes. "[It’s] a bit like being stuck at Thanksgiving dinner with a garrulous, self-regarding, time-sucking uncle. Gotta love him — but maybe let's turn on the television."