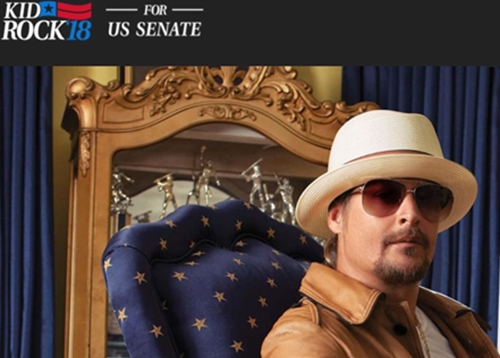 Don't count Kid Rock out of running for Senate just yet, because Republicans can't get enough of the idea, writes Washington reporter Ben Kamisar for "The Hill."

The rock star — real name Robert Ritchie — would likely dominate the primary field if he entered the race and comes within striking distance of the Democratic incumbent in recent polling.

Kamisar quotes no fewer than six GOP insiders on the potential candidacy. Essentially, Kid Rock is a mixed candidate: He has stellar name recognition and popularity in Michigan, and that matters. A lot. His unorthodox background could cause issues, such as the potential for devastating opposition research, but poll numbers are hard to argue with.

Polling suggests Ritchie would clear the primary field and have a fighting chance for the general. A poll from the Republican-leaning Trafalgar Group found Ritchie with 50 percent of the vote in a late July primary poll, with [former Trump Michigan co-chair Lena] Epstein far behind in second place with 9 percent.

Republicans say the polling suggests Ritchie is in a good place, especially for a political neophyte who would run against an experienced senator.

Kid Rock may not have what it takes to be a diligent member of Congress, says one of Kamisar's sources. He's not passionate enough about the nitty gritty of the process. But as a potential challenger for uber-establishment Stabenow, Republicans love him.